Written for my page on myositissupport.org
Please share your story with us...
About 3-4 years ago, I started to have a hard time drying my own hair – friends remember me saying what a pain in the butt it was, but I thought nothing of it. I used to be a hair stylist, and I thought that I was probably losing some arm strength from not being in the salon anymore. I also started to notice small red bumps and sores on my knuckles. 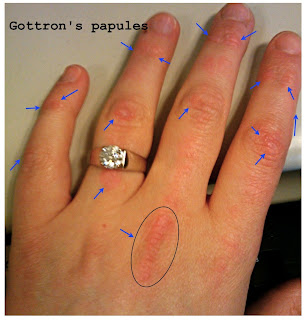 I went to my dermatologist to see what the bumps were; she quickly called them warts and moved on. A year later they were worse, I asked if she could help them because they hurt, and she gave me a strong Retinol cream that didn’t help at all and told me that if I wanted to, she could laser them off for me. 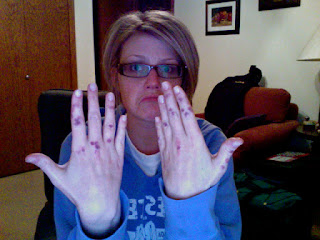 Finally this past December (2009) I went in to laser treat my hands. I had over 20 spots that were painfully laser treated. I was told that they would bruise and then go away. I thought that I was done with my “warts”. In the days that followed, my “warts” became badly inflamed, infected open sores. I went to an Urgent Care where they told me that if they became any more infected, that I could lose a finger to amputation. I was devastated and in SO much pain. When I called to try to talk to my Dr. about it, she blew me off and acted like it was my fault.
Months later, and finally healed, it was time for me to get my 6 month skin check (I am very fair and freckly). I didn’t want to see my old dermatologist again, so I did some research and found a new one. I went in to see her in June; she took one look at my hands and said “Dermatomyositis.” Those “warts” were Gottron’s Papules. She asked me if I had been feeling tired or if it was hard to raise my hands over my head and shocked, I said “yes”. Two biopsy’s later, she officially diagnosed me, but I had no idea what was ahead of me.
I was immediately sent to get a mammogram, have TONS of blood work done to check every single thing in my body. I went to the rheumatologist, had an EMG, MRI, CT scans and a muscle biopsy, and everything all within a month. I was scared, confused and exhausted.
All tests came back clearing me of cancer, but also showed extreme edema and atrophy in my muscle tissue, all consistent with DM. Although my CK hasn’t been consistent, my ANA always comes back sky high (1:320). Oddly, this made me feel good. It was like getting a pat on the back for fighting the weakness and fatigue that I had been feeling over the past few years.
At first I said that I would have never gone to the doctor for how I was feeling; since I just thought that I was old and out of shape. Thank God that I did know though, as in the following months the disease seemed to really kick in. I began having a much more difficult time going up and down stairs, raising things to put away in the cupboard at home, and drying my hair has become nearly impossible.
Initially, I was very happy with my Rheumatologist. She came highly recommended, and had 6 other patients with DM. Over the past 10 weeks, I have been underwhelmed by her attentiveness. She seems much more concerned with 2 of them than me, since they are much sicker than I am.
Now, I just wait; 12 weeks is on Nov. 30th. I am in pain, I’m scared, and I can’t get the kind of answers that I’m looking for. I feel like I am losing my trust in my doctor. I am on the waiting list to get into the Mayo Clinic, but am trying to escalate it.
I try to be as positive as I can; and I have so much in my life to be happy about. I am surrounded by an amazing support system, but can’t help but continue to feel alone. I feel better already just knowing that there are 33 other people in this group that I could learn about their stories, successes and challenges. Here’s to us!
Any helpful suggestions for those just diagnosed?