So, the last time I checked in with lab work, etc., I was convinced that taking my weekly Methotrexate (MTX) injection with ice cream was going to solve all my problems (not really, but that is my incredibly brief synopsis from the last post).  Well the ice cream trick didn’t make it to a second try, I also quickly remembered why I took the shot at night in the first place, because sometimes it makes me feel sick which is something I would rather experience at the end of the day.

Then, I was feeling sad about the figurative use of the word “orphan”.  I have been around and around with where I’m at with my Dermatomyositis.  It’s this crazy-ass disease that I loathe, yet I’m thankful for the lessons that it has taught me, and the positive changes that have come into my life because of it.  I’m a different person than I was 4 years ago.  My life is so different, but I’m better because of it.

So without further ado, my recent lab work and all health status.  I’ll get into the nitty gritty after getting the numbers out.

4/29/14
Labs are good.  No liver, kidney or blood cell count abnormalities.
LDH is now normal after being abnormal since 2010.
Anti-nuclear antibody has increased to 1:640
Thyroid and B12 are both normal.
No systemic inflammation detected.
Blood serum saved to test remaining antibodies.

5/17/14
MRI report for cervical spine received.
There is an area of mild degenerative change at the C6-C7 disc caused by degeneration.  There is no pinching of the spinal cord or exiting nerves.
No abnormal signal in the spinal cord suggesting an abnormal lesion such a Multiple Sclerosis (MS).
If symptoms continue to occur, it’s recommended that I see a neurologist.

The first couple of results are from my regular 3 month check-up with my Rheumatologist.  2014 got off to a rough start and mid-February through mid-May was the worst.  For the first time in my experience with DM, I had intense weakness that came on suddenly and nearly caused me to fall.  Thankfully, I was at home for the majority of these incidences, and when out and about I either had a shopping cart to slump over, or my husband to act as my cane.

I also noticed increased weakness in my upper arms and thighs, a trademark DM flare indicator.  I struggled with stairs, with drying my hair, folding laundry; the usual suspects.

Both my regular doctor and rheumatologist were very concerned about this, but no one more than me.  As a moderator for the myositis group over at Ben’sFriends, as well as a member of several myositis support groups on Facebook, I am painfully aware of the struggles that my fellow DM patients face.   I know that I am one of the lucky ones.

After checking a few extra labs that may explain the weakness, my rheumatologist ordered an MRI to check my arm for inflammation.  She also ordered an MRI of my spine to rule out a pinch, inflammation or any lesions (associated with MS) on the spinal cord.  The concern was that there could either be some overlap (MS or other connective tissue disease).  Since my last MRI had been 6 months ago, with such a rapid decrease in strength, the culprit could be a demyelinating lesion or transverse myelitis, both of which can cause a very rapid deterioration of the spinal cord, resulting in sudden loss of strength as I had been experiencing.  Thankfully, it appears that my symptoms were due to neither.

I can’t quite explain what has been happening with my weakness, although I know that I am not alone, as many of my friends within my Myositis support groups go through these flares as well.  My best guess is that after being sick for so long, that my muscles have atrophied and what I have been feeling as “DM weakness”, is really just weakness from being physically weak.

I asked my Rheumatologist if I would ever get my strength back.  She said that it is all dependent on how badly the muscle cells were damaged when inflamed.  Some patients will never gain back any strength greater than when the myositis was flared.  Some patients will go on and build back muscle and get stronger.  Other patients may gain some strength back, but almost be a combination of the two previous examples, if their damaged cells are surrounded by healthy cells that can rebuild and grow.  Either way they road to recovery is a slow and often frustrating one.

Both of my doctors have once again recommended that I begin a swim therapy class and some type of core strengthening program and I’m ready to take the plunge (sorry for the terrible pun, I honestly couldn’t think of anything else to say).  It’s been so hard to get going.

I have been so weak that it has been beyond discouraging to get moving.  It’s hard to feel the momentum of your activity when you can only make it half a block and back and then need to lay down.  Baby steps though!  I’m ready to make a change and get back to a healthy place physically.  Especially since my labs tell me that I’m good to go!

In other efforts to get myself to a healthy place, I have been looking into the Auto-Immune Protocol (AIP) Diet.  I’ll dive into this a little further after reading my first book, but wanted to put that out there.  More on this to come in an upcoming update.

Lastly, and seriously least, my skin.
The little bumps that I previously mentioned delightfully spread to my chest, jawline, back of neck and side of mouth.  It’s called folliculitis and it sucks.  Well, apparently the part by my mouth is called atopic dermatitis(aka eczema) and it also sucks. 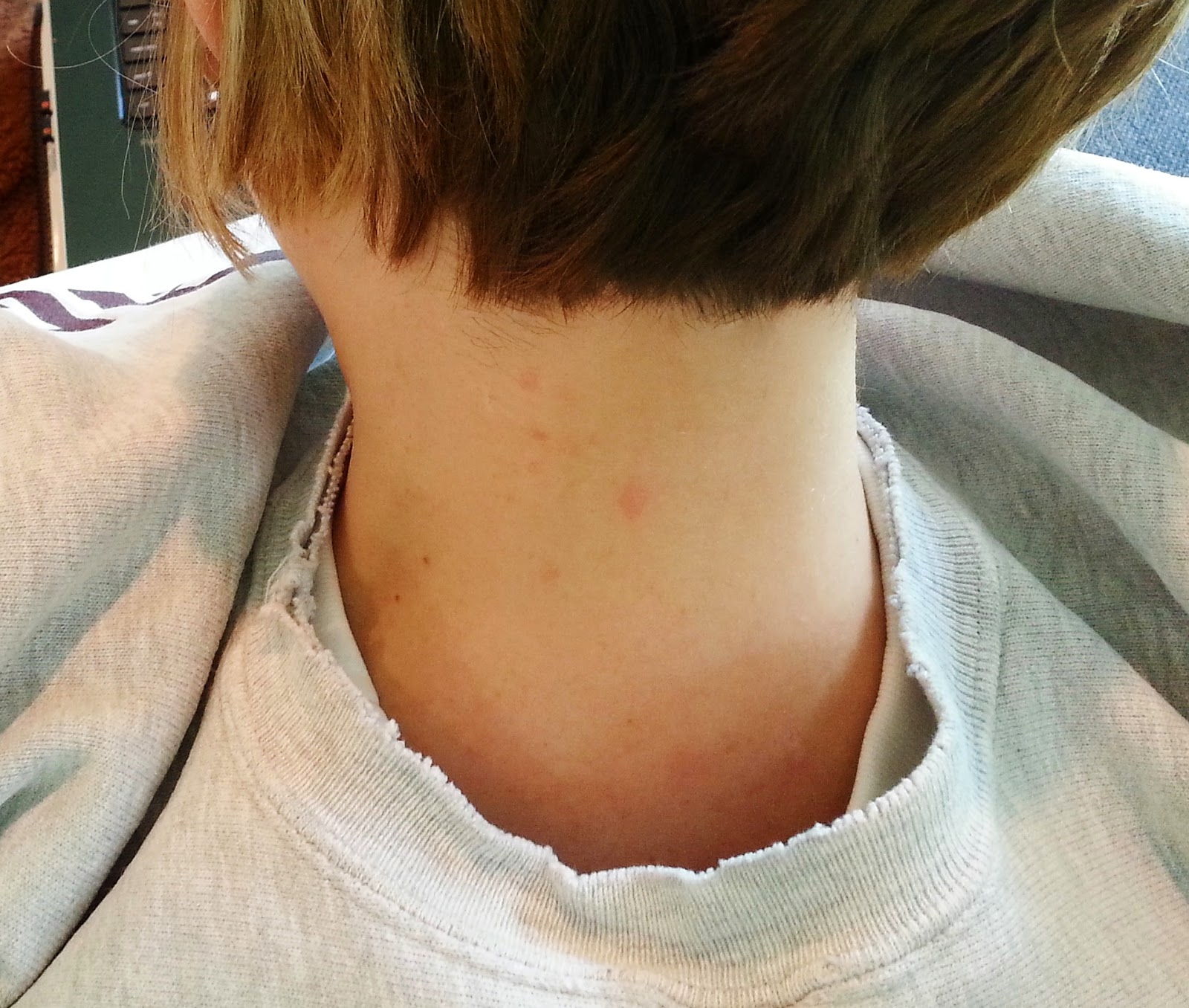 The creams and wash do seem to help, but then it’s only a matter of days or a week before the signs return and the application regimen begins once again.  I’m not going to lie; I know that it could be so much worse, but this skin stuff really stresses me out.  I feel so vain.  I guess my skin’s appearance is more important to me than I realized.

One thing that has helped is to spend time with people who know what’s going on with me, so I don’t feel like I have to explain.  I suppose this is something that I have learned about myself in general with my health.  It’s so much easier to know that the people around you understand and support you.

Oh crap.  My foot.
The past 6 months have included 5 laser treatments, a small surgery, 2 shots of Bleomycin (a chemo drug), a “burn & scrape”, and most recently a few rounds of freezing.  My dermatologist thinks that it’s finally gone, but wanted to be sure, so he froze it and I nearly flew off the table.  My foot is SO tender, since we’ve gotten down to the very bottom of this beast, I nearly karate-kicked him in the face last week when he hit it with the cold stuff.  I so hope that jerk (my wart, not my dermatologist) is gone.  I’m not sure I can take any more hits on this flipper of mine.

I just had another appointment last month (July) but I am still waiting on a copy of my labs.  I’ll post that update in the next week or so!

Have a wonderful week!
Maren
No comments: